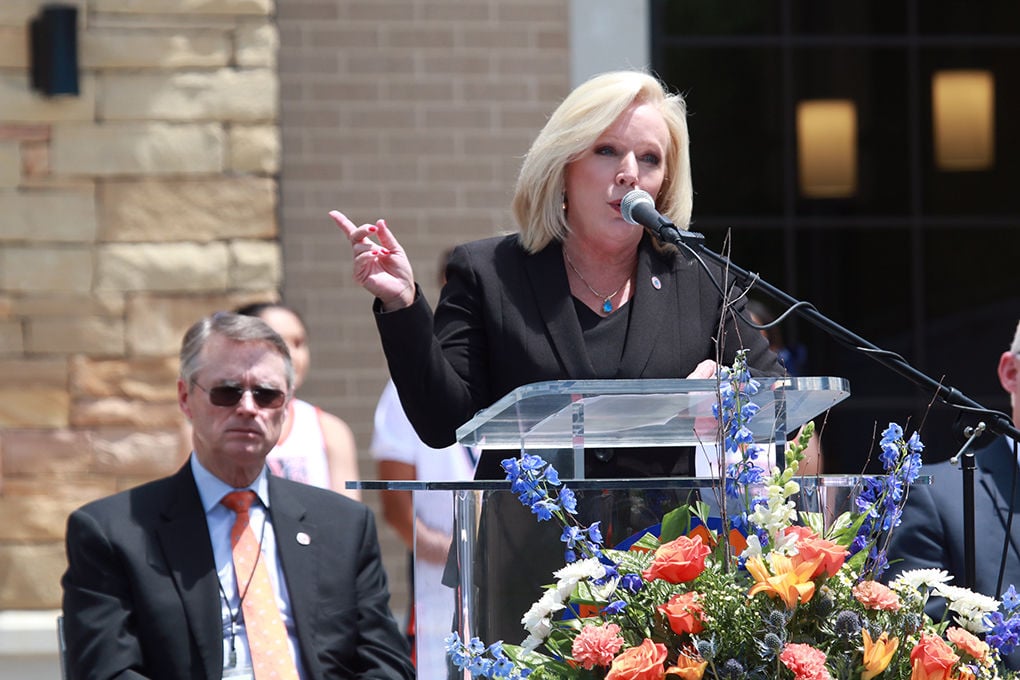 Representatives of the City of Oneonta, Blount County, Wallace State, and the Alabama Community College System gather for the ribbon cutting at the new Wallace State-Oneonta center. The facility consists of a total of 20,000 square feet dedicated to the growing number of students and the expanding curriculum offered at Wallace State-Oneonta. The building also includes multi-use classrooms for workforce development and other community and economic development opportunities.

Three years after opening its first facility in Oneonta, a ribbon cutting and open house were held for a new Wallace State-Oneonta Campus Center on Thursday.

The new flagship facility for Wallace State’s Oneonta Center marks Wallace State’s fourth expansion in Oneonta in three years due to increasing demand. Since opening in 2016, 1,064 students have been educated at WSCC-Oneonta. The campus has created 11 full-time jobs and more than 70 part-time jobs.

“WSCC is indeed honored to call Oneonta home and to work side by side with the members of this community to provide access to quality higher education,” said Wallace State President Dr. Vicki Karolewics.

The new facility is the culmination of more than six years of “visioning, planning, negotiating, fundraising, problem-solving, relationship building…,” said Karolewics, thanking Gov. Kay Ivey for her support of the project.

Governor Ivey attended the October 2017 groundbreaking for the facility and presented a $2.3 million grant for the project.

A machine tool technology program will begin this fall, funded in part by an Alabama Community College System workforce grant allocated by the Alabama Legislature. Kamtek in Birmingham is sponsoring 12 apprentices for the machining program. The college will also begin a program in the management of public safety. A broadcast and digital media program is being considered.

“We have been busy here meeting the needs of the communities we serve,” said Karolewics.

Last year, Oneonta was named an Alabama Community of Excellence. Inviting Wallace State to be the community’s higher education partner was part of that vision for economic development and downtown revitalization.

Norris also extended a special thanks to Governor Ivey. “It was tremendous what she did. We will never forget it,” he said. The $2.3 million grant was the largest grant to Oneonta on record.

“It is no secret that Wallace State is one of the strongest colleges in the Alabama Community College System. It is one of the premier community colleges in the nation. The City of Oneonta, Blount County, you already know this, but you have partnered with a top-notch college and it will deliver a top-notch education to your citizens,” said Matthew Woods, member of the Alabama Community College System Board of Trustees.

“The expectation for excellence at Wallace State starts with its president, Dr. Karolewics, and permeates throughout the college. The end result is a student who is well prepared for academic transfer or a well-trained and highly-marketable employee that is ready to enter the workforce,” he said.

Prior to the ribbon cutting, Wallace State announced the naming of the Eldridge Bynum Resource Center, located inside the new facility.

Bynum (1933-2015) was a tireless supporter, encourager, and advocate for education in Blount County and for Wallace State. He wrote numerous grants over the years for education, and secured millions of dollars in funding for Blount County, the City of Oneonta, and for student scholarships.

Also as part of the ceremony, area high school students who were finalists in a creative writing contest held by Wallace State-Oneonta for Community College Month were recognized. The fiction category winner was Jessi Lynn King of Oneonta High School. Cameron Glasscox of Oneonta High School and MacKenzie Criswell of Susan Moore High School were finalists in that category. In the poetry category, MaKenzie Walker of J. B. Pennington High School was the winner, and Charlene Chavez and Jason Montalvo, both of Southeastern High School, were named finalists. A special honorable mention recognition was given to 7th grader Kathryn Briggs of J.B. Pennington.

“The Oneonta campus is a model for what can happen all across our state when a community embraces its local community college,” said Woods.

“It is an exciting day for all of us at Wallace State-Oneonta,” said Wes Rakestraw, director of Wallace State’s Oneonta Campus.

Summer classes begin on May 22, and the new Wallace State Oneonta facility will welcome its first classes then. Two four-week flex terms beginning June 3 and July 2 will also be offered this summer. Registration is going on now. Visit wallacestate.edu or call 866-350-9722 or 205-625-4020 to learn more.